• On April 23, 2019, an enthusiastic audience attended Open Show L.A. #52, organized by Jonas Yip and Richard S. Chow, and hosted by Chris Davies at Fabrik Projects Gallery. Five interesting projects were presented, of which I have selected two for a more extensive description.

Douglas Stockdale’s “Memory Pods” project effectively draws parallels between human and plant life cycles – genesis, life force, and ultimate deterioration or loss, a physical process with unpredictable entanglements. He documents the process of plant life from the source – their seeds contained in pods, tracing their progress resulting in the gradual withering of parts of their structures until an ultimate cessation of functioning occurs. These stages can exist simultaneously in one single plant organism, as shown in Stockdale’s beautiful semi-detached botanical portraits.

This aging process is visualized as a parallel for human life as well; it is a metaphor for the entanglement of brain connections in some humans who suffer from Alzheimer’s disease or other forms of dementia, after most of their life has been lived, spending the last phase in a kind of nirvana marked by an intermittent semi-awareness, and hanging on to life without full functioning, leading to the end of the human organism in a similar manner. These parallel processes are natural yet painful; the caretakers of plants and humans sometimes face the same role of helpless bystander in the face of loss of physical and mental capacities in others for whom they care deeply.

Michele Zousmer’s “Irish Travellers” photographs have  a slightly stronger saturation and contrast than customary, which seem necessary for the intended visual and emotional impact. Her images emphasize the difficulties of the Irish Traveller society, yet also a strong potential for coming generations. Cute freckles, sad children’s expressions, provocative poses, colorful accoutrements, accented makeup and other features all add up to allow us (and hopefully them) the realization that social groups that are somewhat on the periphery can also have strong goals and strive for better things for their children and grandchildren. A tight edit and some additional photographs providing a bit more of their surrounding environmental context would be good for the creation of a fascinating book that investigates strengths and potential for this cultural group and others with similar challenges. I find Michele’s visual advocacy most admirable. 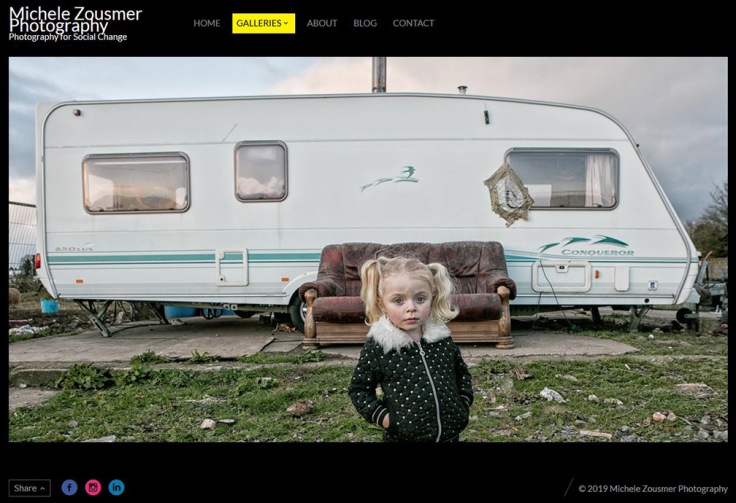 An image from Michele Zousmer’s Project. More on her website

The other three presentations were also intriguing. Rollence Patugan introduced his project “The Danes,” a study of  social insiders who are viewed as outsiders because of their appearance, in this case Korean adoptees in Denmark. SameSource showed and discussed “Reinterpreted,” which takes classical paintings as a point of departure for photographic fictions with reinterpreted social and sexual roles. Last, but certainly not least, Jeremy Jackson and Jordan Jennings presented their project “7th and Los Angeles,” consisting of authentic and edgy black and white studio portraits of some Downtown Angelenos.